All pages are informative – not therapeutic. Read first the Budwigpage.

Against cancer, chemo and radiation therapy have been used for approx. 100 years, and are even today is the basis for the treatment approved by the medical community. But is this a remedy against the cause of cancer? Has cancer been defeated?

Cause for a cell to develop cancer 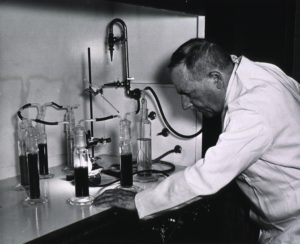 Biochemist Otto Heinrich Warburg studied living cells during their transformation into cancer cells. He discovered that the root cause of a cell developing cancer is lack of oxygen and that this was directly linked to the degree of acidity, i.e. how much pH was below 7. If a cell for 48 hours is deprived of 35% of oxygen consumption, it becomes a cancer cell. The same is true if a cell becomes too acidic.
In 1931 he received the Nobel Prize for his discovery.
Already in 1926 he had the idea that certain fats played a role in oxygen uptake. In addition, everyone knew that all oxygen-containing cells contained sulfur-containing proteins. He believed that a compound of sulfur-containing protein and an unknown fat to a so-called sulfur-containing lipoprotein, was needed to restore the oxygen-absorbing enzymes. He tried with butyric acid, but it failed because of a small mistake, he should just have used hardly known omega3 fatty acid. Many others searched for this background in the next decades after the mysterious fat without success. It was a work in the blind, as there was a lack of methods for chemically analyzing fats.

Budwig was in 1951 the German health authority’s senior expert in fats and medicine. She was the first to create methods for precisely determining, for example, the content of the unsaturated fatty acids omega3 and omega6 in a given fat. She found out that omega3 was the solution to Warberg’s problem, and that flaxoil was the oil among the commonly sold oils that contained most omega 3, namely 61%.

In 1951, the researchers knew that in the blood of cancer patients was a dominant yellow-green substance, cytochrome. This substance was desired to be converted to the red blood pigment. Budwig’s boss and research partner Professor Kaufmann decided to make a more entertaining experiment. He sprinkled cytochrome on a piece of paper and asked me to make it red. Budwig touched the powder – and at that place it turned red. He looked at my hand and said, “Do you have red paint on hand?” Budwig replied, “No professor, you can do the same.” He touched the powder and it turned red there. Then Budwig said, “I know you started pouring flaxoil into your yogurt.” This dialogue must be seen in the light of her observations with a 2-phase contrast microscope of, how blood from cancer patients is affected. The “red” blood cells lacked the normal lipoid (oil) layer, although there were fat globule cells in the blood. After giving the patient the omega3 cream, the condition changed completely within 3-5 hours. The blood color became better and the cells now had a thick lipoid layer. They arranged themselves as coins in a coin roll.

Dr. Verma writes: Budwig decided to have human tests on cancer patients from four hospitals in Münster. She gave flaxoil and quark healthy diet to these patients. After three months, these patients showed improvement in health and strength, the yellow-green matter in the blood disappearing gradually, tumors gradually declining and at the same time the intake of nutrients began to increase. In this way, Budwig had found a way to fight cancer. It was a great victory.

This was one of several evidences of Budwig’s research findings, that the omega3 diet was able to degrade tumors and metastases through the immune system.

Budwig reports: I often take very sick cancer patients away from the hospital, where the hospital estimates that they only have a few days left to live in, or maybe only a few hours. This is mostly accompanied by very good results. These patients could no longer urinate or produce stools. They suffered from dry cough without being able to produce mucus. Everything was blocked. It reveals them greatly when the surface active fats with their wealth of electrons reactivate the vital functions, and all of these symptoms suddenly diminish, and they immediately begin to feel better.

Here is an example from (Budwig – Der Tod des tumors 1977 page 243, https://soilandhealth.org/copyrighted-book/der-tod-des- tumors):
In 1955, Mrs F. W. was a patient in the Freudenstadt University Clinic. She had a tumor that pressed on the heart. In addition, a study showed visible and slightly apparent tumors emanating from the chest, and that adhesions and tension to the arm were so strong that the arm was very difficult to move. The patient was considered “not suitable for surgery”. In 1955, she began Budwig’s omega3 diet. “She is doing well this day (1964), without surgery and irradiation.”

One has to wonder that Budwig’s diet and protocol are not officially used in hospitals. What suffering could have been avoided, not to mention the savings it would have for society?