For Every Sickness There Is a Healing Plant  –  W. D. Storl 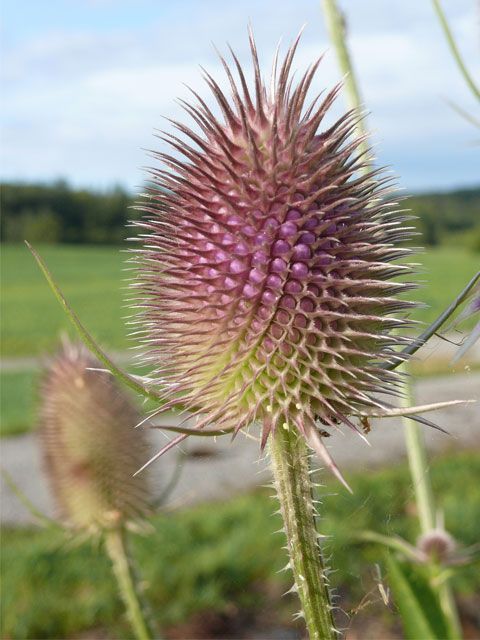 People might take Teasel Root for the following reasons:

Teasel Root is used for healing from Lyme Disease and for good reason. (NB: Tics are repelled by coconut oil.) Borrelia, the Lyme bacteria, is a spirochete bacteria which means its body is spiral shaped and designed to drill into tissue such as joints, organs, and even bone. While buried within the tissue of our bodies, the spirochetes are cleverly concealed and out of reach from antibiotics and the immune system much like in a biofilm or cyst form. Teasel Root is used for its ability to pull the bacteria from our tissue and into our blood stream, exposing it to antibiotics and the immune system. 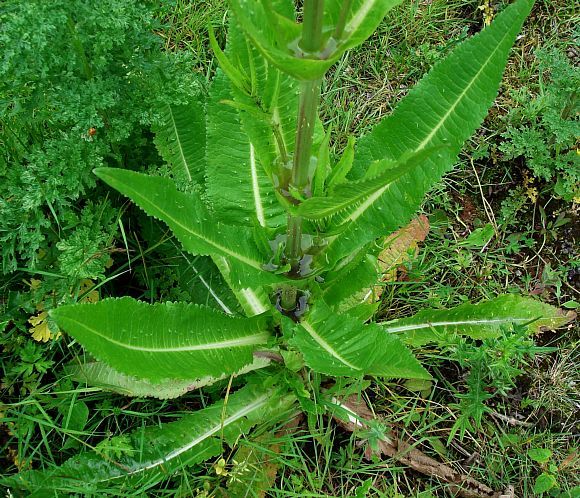 Teasel is a biannual plant which in its first year produces a low, basal group of leaves. Here is it the second year.

Teasel Root works in conjunction with antibiotics, biofilm dissolvers and cyst buster for maximum effectiveness. As we search for effective treatment and alternative protocols, teasel can be very effective against chronic Lyme disease and other auto-immune disorders. Dr. Burrascano, Stephen Buhner and other experienced Dr.s recommend teasel and also Dr. Scott Taylor in the not-to-be-missed article “Lyme Disease: A Plague of Ignorance” .

Teasel drives the spirochetes from the joints into the blood stream, which is why it is very effective to take while taking antibiotics. The teasel pushes the bacteria out of their hiding place while the antibiotic or other alternative bacteria killers can do their job. Teasel may help stop the spirochetes from evading the immune system too. Even when taken alone with out the assistance of antibiotics it can cause a significant herx, which indicates die-off.

Teasel is to be taken long term in low doses for total saturation. Spirochete’s can go dormant for long periods of time and then become active again. By slowly saturating the body with teasel it stays in the system to kill the Lyme when it becomes active.

Teasel is known to help with joint problems, tight ligaments, and cramping. It has been very helpful for people dealing with Lyme. FM, MS, all chronic problems involving joint and muscle pain.

To buy from Germany as “Kardenwurzel”. Tincture is preferable, as dose is easy to adjust.
1 Tincture (E.g. three drops three times a day in homeopathy-oriented view. For patients with a sensitive, delicate condition that is certainly the right dosage. For the healed, as a prophylactic measure, the cure may be repeated once a month for three days, in each of the following twelve months.)
2 Capsules (concentrated root extract powder 0.5–2 grams)

In difficult situations biofilm and cysts should be adressed.
Biofilm: Natural treatment by food.   [https://selfhacked.com/blog/44-science-backed-ways-to-inhibit-biofilms-naturally-with-references/]


Borrelia spirochete activity peaks every month or twenty-eight days, corresponding to lunar rhythm. The duration of the cure should thus be at least one month. Rudolf Müller, a Lyme disease therapist, suggests full dosage for one month and then gradually decreasing the dosage over the next weeks. 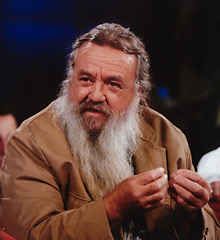 The shaman inspired anthropologist and ethnobotanist Wolf-Dieter Storl has himself tested the intake of the root as part of a group of lyme infected, all in meditative self-observation. It felt as though the teasel tincture was able to free the energy in the body that had been bound up by the disease. This energy was then able to radiate out again and carry the pathogens to the outer borders where they could leave the body. A slight skin rash could be interpreted as a harbinger of convalescence.

A friend of Storl treated his three-year old with the pulverized dried root. She had a swollen red earlobe, where the spirochetes had retreated, as they prefer a cool part of the body (and are killed by very high fever). He gave her one teaspoonful of powder a day, mixed with honey to make it more palatable. After about two months, the earlobe was normal again and his daughter had recovered her normal energy.

B: I had been suffering for the last three years from chronic borreliosis, rendering me incapable of continuing my work as a bio-physicist. The infection affected the lymph system, clogging it and leading to severe eczema. The effect on the nervous system was even worse, leading to lapses in memory, especially short-term memory. I have gone through several courses of antibiotics as well as trying various alternative curing methods. When I finally took the teasel tincture, the effect was immediate and the result can only be described as a miracle. I want to thank you; you have done a great service to the healing arts.
– Dr. B.
After many antibiotic infusions and recurrent pain and paralysis now teasel tincture. I take three full tablespoons a day, which is wonderfully bitter like medicine should be.\[Ellipsis] In the first week the symptoms got much worse. I could hardly walk and my feet burned which was almost unbearable. Now, in the second week, a remarkable improvement. No more pain, or only minimal pain in the joints. The eyes clear and not inflamed.
– D.
About two months ago I ordered a bottle of teasel tincture for a patient, a dog. I am a veterinarian. Thanks so much once again! In the meantime, the dog is a picture of vital life itself, it is doing better than it ever had!!! We are very enthused! Now my colleagues here in the clinic plan to treat the animals with teasel tincture also.
– Dr. W., veterinarian
The teasel treatment made me into an almost-normal person again after an acute case of Lyme disease. First I was treated with twelve different antibiotics and cortisone compounds and I ended up in isolation in a clinic for nerve diseases in Munich. That turned out to be a saving grace, though, as the doctor there took me off of all medication. The pharmaceutical “brew” seeped out of open sores from head to foot. The sores were up to 2 inches wide and close to each other and the skin between them itched terribly. The skin was open for months and afterwards my whole body would itch, even after numerous detoxifying flushing treatments. The joint pain made my hands basically useless. The Lyme disease was still there, worse than ever. The only thing that helped, accompanied by many natural liver, kidney and lymph medicines, plus homeopathy, was the teasel treatment and lots of spirulina.
– H.

From https://www.flaatthjelp.net/to-sma-flattbitt/teasel/
This article aims to show that teasel (Dipsacus sylvestris) has the ability to restore a life broken down by Lyme disease. The first six years were characterized by undiagnosed neuroborreliosis without the more well known Lyme symptoms of joint and muscle problems. However, after a re-infection six years later, the physical problems also appeared. A treatment with Tincture of Teasel Root lasting for 7 ½ months on a low dosage (altogether two 30 ml bottles) cured all the problems. Two brain scans, one taken during years of illness and another taken after the treatment was completed, provide indisputable evidence of teasel’s effectiveness.

Teasel tincture production.
The root of the biennial plant is taken first year or before a stem grows. The root is washed and cut into small pieces, which are stuffed into a clean jar and covered e.g. with vodka or similar. After three weeks in a warm place the tincture can be put onto dropper bottles.